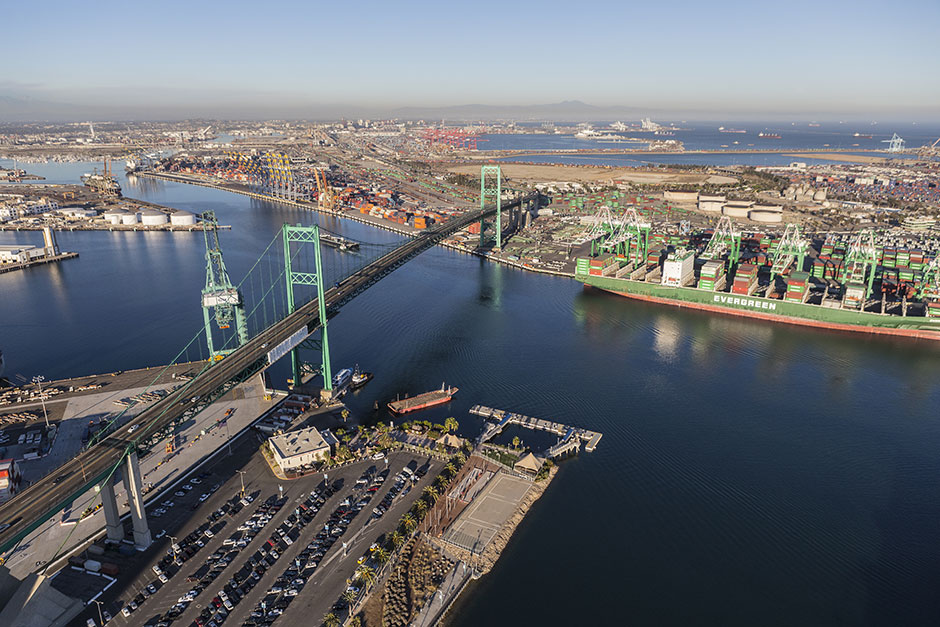 DTCI led this project for the Ports of Los Angeles and Long Beach to analyze the effects of implementing a Clean Truck Fund Rate (CTFR) on the local drayage market and port traffic. The CTFR will be charged to beneficial cargo owners (BCOs) for each loaded container move by truck if the truck is not compliant with near-zero or zero-emissions standards. The CTFR is a component of Ports’ proposed Clean Trucks Program under the Clean Air Action Plan Update 2017 (CAAP). The study was undertaken in collaboration with Darryl Anderson of Wave Point Consulting of Victoria; Gill Hicks of Gill V. Hicks and Associates of Los Angeles; and Michael Kieran and Melissa Kieran MacDonald of Montreal.

The Port of Los Angeles’ and Port of Long Beach’s (Ports or POLA/POLB) 2017 Clean Air Action Plan Update (2017 CAAP Update) committed to a strategy to update the Clean Truck Programs at both ports to build upon the existing, successful programs. The objective of the Ports’ updated Clean Truck Programs, as stated in the 2017 CAAP Update, is to transition the current drayage truck fleet to near-zero technologies in the near-term and ultimately zero-emissions technologies by 2035. A key component of the updated Clean Truck Programs is the implementation of a Clean Truck Fund (CTF) Rate. As proposed in the 2017 CAAP Update, beginning in 2020, a rate is to be charged to the beneficial cargo owners for loaded heavy duty container trucks to enter or exit the ports’ terminals, with rebates for trucks that have CARB-certified low NOx engines or better. The added cost of this CTF Rate is expected to help incentivize the transition of drayage trucks operating at the Ports to cleaner equipment.

DTCI was engaged by the Ports to assesses how a range of potential rates, from $5/TEU to $70/TEU, could: (i) affect the Ports’ economic competitiveness, including the potential for cargo diversion, (ii) impact the drayage industry, and (iii) generate revenue from collection of the rate.

A two-step sequential methodology was used to accomplish the research objectives:

Econometric analysis was used to estimate the elasticities of POLA/POLB import container traffic for specific traffic segments (Inland Point Intermodal (direct rail), Transload to Rail, Transload to Truck, and local cargo. Based on these, estimates of potential import traffic losses for the Ports of Los Angeles and Long Beach due to the Clean Truck rates ranged from .1% for a $5 per TEU rate to 1.4% for a $70 per TEU rate.

Analysis was carried out using the Drayage Cost and Fleet Projections Model to estimate the potential impacts of the CTF rate under various assumptions regarding CTF rate levels and capital subsidies. The scenarios included varying assumptions regarding the timing and application of CTF rates by truck type, and the availability of capital subsidies. The impacts were estimated for each scenario for five potential CTF rate levels to be charged for loaded containers picked up from or delivered to the port terminals: $5, $20, $35 $50 and $75 per loaded TEU. Four of the scenarios included sensitivities to the impact of potential cargo diversion, making a total of ten scenarios to be modelled.

The figure below shows forecasts of the impact of the combinations of emissions requirements, rates and subsidies on the percentage of non-Near Zero Emissions (non-NZE) diesel trucks in the fleet from 2019 to 2035.

The Draft Economic Study for the Clean Truck Fund Rate can be downloaded from the Clean Air Action Plan website at cleanairactionplan.org. The full DTCI study is included as a Technical Appendix.