Davies Transportation Consulting Inc. (DTCI) was engaged by Forestry Innovation Investment (FII) to increase its understanding of the shipping and logistics options available to industry when approaching new Asian markets including India, Pakistan, Vietnam, Indonesia and the Philippines. The scope of this project included:

The logistics competitiveness of B.C. lumber exports has been analyzed based on two measures: ocean rates and ocean carrier transit times. Comparisons are based on shipments from the Port of Vancouver and competing ports in other major lumber exporting countries. 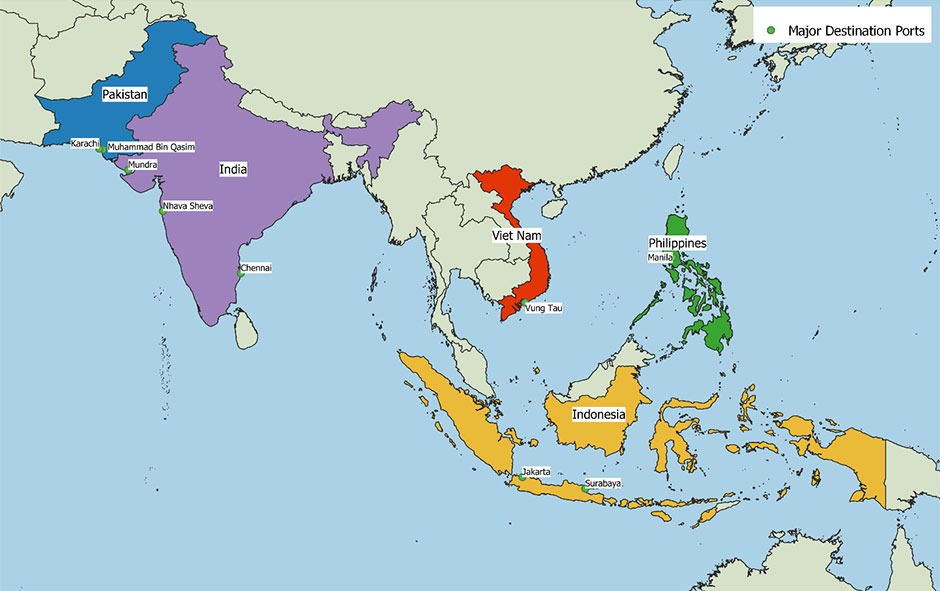 Ocean rates for exports from the Port of Vancouver to Pakistan and India were found to be higher per m3 than both E.U. and U.S. East Coast exports. Multiple suppliers have lower ocean rates than Vancouver to the Vietnamese market, including the U.S. West Coast (Oakland), U.S. East Coast and New Zealand. For exports to Indonesia, Vancouver had the lowest ocean rate per container and per m3 among major suppliers. The Philippines is B.C.’s largest market for softwood lumber exports among the five selected markets. Ocean rates from Vancouver to the Philippines were found to be slightly higher than from competing suppliers in the U.S.

Analysis of ocean transit times found that none of the competing origin ports has a major systematic advantage in transit times, as all major ports have a wide selection of carriers and routing options.

Domestic and ocean logistics costs were estimated for both Interior and Coastal mills. Domestic logistics costs (including transportation to the port region, container stuffing and drayage) typically exceed the export costs (ocean rates) for both.